Karl is a Kiwi who loves to communicate the greatest message in history in visual, narrative, and online forms. He lives in Hong Kong and can be followed @karludy

Last year Chris, a student at Hong Kong Polytechnic University got excited about using Facebook pages for ministry and over the summer organized a group of students representing the main universities in Hong Kong to incorporate Facebook pages into the University Freshman Orientation (UFO) for the coming year.

The experience of one of these campuses, Chinese University of Hong Kong (CUHK), stands out.

Lam Ching was the student from CUHK   tasked with organizing this facet of the UFO strategy for her campus. She discussed the possibilities with her discipler, Shan, and they settled on having separate pages for connecting with Christians and non-Christians. They thought about what potential topics they could have for a page that would be relevant to incoming freshmen, and decided to create a page that gave useful tips on adjusting to life on the CUHK campus. Most of this information was actually on a website, but students did not go to the website to find this information, but they did spend lots of time on Facebook. So they began by putting together an answer database of the questions that freshmen most commonly ask when they come to CUHK.

They then promoted this Facebook page on popular Hong Kong forums such as www.discuss.com.hk and www.uwants.com.

CUHK students enroll in two batches, one in July and the other in August. When they started the page in mid-July they found that by the time of the first enrollment in late July they had too much activity on their page for one person to manage. Lam Ching recruited students to help her post information and deal with responses. After the first intake of students completed their enrollment, the number of students liking the page grew even faster, and by the time classes started the page had over half of the 6000 freshmen at CUHK liking their page. 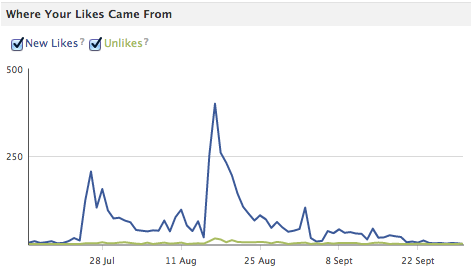 Notice the two peaks each about a week before the outreach talks as the two new intakes of students found the page.

They promoted orientation tips talks on their page. These talks also included gospel content. There were three talks (originally two were planned, but one was over-subscribed) attended by 118 students out of which 9 prayed to receive Christ.

Why did it work?

There are a few reasons why we can see this strategy worked so well:

There were some other factors that are perhaps not so obvious that had a significant impact in the success of this campaign:

Graphs showing the reach and engagement of the page. Notice the peak reach of 100k, right at the beginning of September, showing how well the campaign was timed.

How can you leverage digital channels life Facebook to support live ministry efforts?