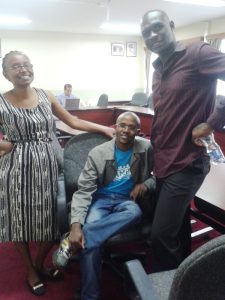 Pauline used to post updates on Facebook a lot before she joined campus. She fought with her mother because her mind was always only on her phone and thus got into trouble for not doing her chores. Many of her posts were the kind that you and I hate, telling us what she is doing at every turn: what they are eating, etc. She had no secrets and this turned against her at some point. After some people spoke to her about this habit, she listened and quit Facebook.

Having now completed her time on campus, Pauline has been convinced to return to Facebook and use it for ministry. She came to that realization during a conference known as Commission 2014, organized regularly by Fellowship of Christian Unions. Pauline was our guide during the conference, where we were invited to facilitate a seminar on Digital Strategies in Ministry. It was a privilege for us to be used by God to impact the lives of many young people from across the continent, using the roads already made for us to share our faith.

Later that day, we listened to the main speaker report of research carried out by the Indigitous Kenya chapter on how the church is Kenya is not using the internet. He challenged participants to get involved. According to his speech, there is no one else in Kenya involved in Digital Strategies apart from our organization. We therefore made a resolution as a team: In the words of Pastor Zee from Indigitous Addis, “We must work hard in building this rail.”

Kenya has been classified as one of the fastest growing countries in internet use. The government and other stakeholders have ‘digitalized;’ it’s only the church that is a bit behind. Our hearts have been warmed by testimonies like Pauline’s in our quest to enlighten and equip the church in our nation on Digital Strategies. We know it’s not easy, but we are leaning on the God who has called us. We trust and obey!