Yesterday the body of Christ joined together for a day-long prayer campaign called the Worldwide Day of Prayer. Followers of Jesus met together in classrooms, conference halls, churches, and over social media to share praises and prayer requests and to speak to God as one body of believers.

I was in Orlando for the event and prayed with around 800 people at CrossPointe Church, but I was also able to connect with people around the world who were praying at the same time. Using hashtag #WDOP2015, people sent prayer requests, praises, and photos of them praying over social media. During the day as I prayed, I watched prayer tweets come in from Panama, the Philippines, Australia, Hungary, Puerto Rico, South Africa, Ethiopia, and more.

The Worldwide Day of Prayer had some solemn moments. Jose Sam, a leader with India Campus Crusade for Christ, joined via Skype and shared stories and photos of the devastation caused by the earthquake in Nepal. He also spoke of brave disciples in Nepal who were given the opportunity to leave the area for a safer place but decided to stay because being huddled under tents with other members of the recently homeless is a good opportunity to share the Jesus film.

Those who took part in the Worldwide Day of Prayer spoke with God regarding events like the Nepal earthquake and the Baltimore riots as well as ministry projects such as church planting, new digital ministry tools, and a campaign to raise future Christian business leaders from the college ranks.

The overall tone of the event was one of praise and thanksgiving. At one point, Ken Cochrum, Vice President of Global Digital Strategies at Cru, raised some eyebrows by proclaiming that thanks to digital technology, “’closed countries’ is an outdated term.” Digital evangelism and discipleship tools can reach people anywhere in the world, no matter how resistant the country may be to the Gospel. 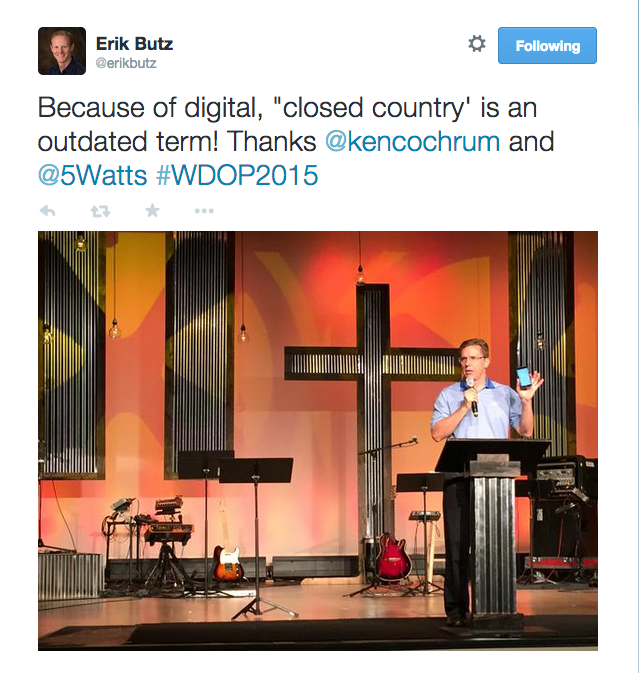 During the event, amid the hundreds of prayer tweets using #WDOP2015, there came a tweet of praise breaking the news that Nigerian troops had rescued 93 women and 200 girls from Boko Haram terror camps. It was just one example of God answering prayers. Colossians 4:2 says to “devote yourselves to prayer, being watchful and thankful.” Yesterday was a great example of that devotion.

You can view more social media posts for #WDOP2015 at our Storify page.