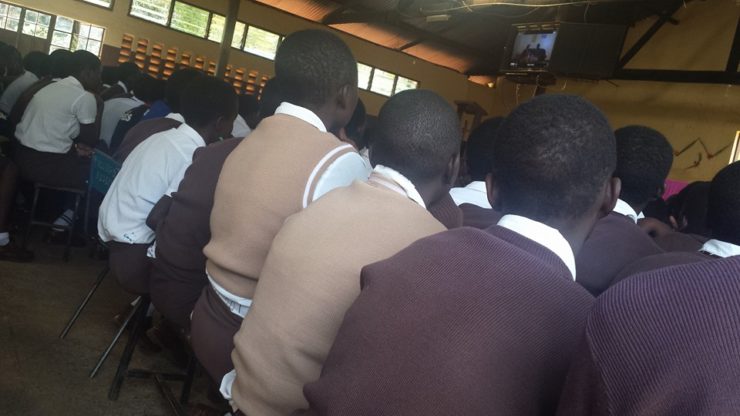 “Mum is around. If you don’t take these visitors to her house she will not be happy,” said this guy to our pastor host.

We were in Homabay County, 363 kilometers from our homes. We had gone to minister to the community using short films exclusively. The mission was dubbed Indigitous MISSION. We were hosted by the Anglican Church and the youth pastor of ACK Homabay Cathedral, Reverend John, walked with us throughout the mission.

On this particular day, we had just come from a school where we had shown a couple short films and over 42 children gave their lives to Christ! The next step was to split up and visit different homes in a neighborhood near the church. We then bumped into Rev. John’s friend, who made the remark above. Some of us were not too excited because we figured that this “mum” must be born again. However, we resolved to just go since God had allowed it.

So we went into the house and after introductions, we asked if there were other people in the house. There were two others, a relative who was visiting and a resident of the house. We showed the films from 3 tablets (we had hoped to use her TV but that technology failed us) at the same time so that everyone was watching together. Then came discussion time, where we asked questions and had discussions for a couple of minutes.

The visiting relative belongs to a denomination that does not openly confess Christ as savior. As we talked, he really questioned what we were saying about salvation and accepting Christ. After explaining to him like a little child, I sort of expected a fight from him, but no! He prayed to receive Christ!

This man lives in Nairobi, the same city myself and the others on our mission trip, but he had to travel to Homabay County at the same time as we for him to receive Christ! I am convinced without a doubt that if we had gone to share Christ in the conventional way, he would not have given us time. He was on his way to his village after some rest and food at his relative’s house when he was invited to come and “watch something.” After praying for him and exchanging contacts, he put on his shoes and got on his way.

This mission trip was specifically designed to test our films. We decided that we should also use the films that we make to confirm that they do work and indeed we confirmed, they work even in the village! We also learnt what works for which audience, whether high schools, for boys and girls, primary schools, or churches. What’s more, we got a convert! Rev. John really loved the concept of short films and now we have a commitment to send him new films regularly. Talk of partnerships!

“I like this idea of short films,” said Reverend John. “It is quite inspiring and appealing to young people who are moving to series and using short films is a way of preserving relevance while maintaining the message of the Gospel. My only appeal is that you make more films targeting more topics and not only the Gospel but also morality to tackle moral decay and integrity in our society, as these things are not in the school curriculum.”

We thank God for over 3,000 souls that were reached with the Gospel and for the over 300 that prayed to receive Christ. Pray for these that the Lord would sustain them in salvation.