Meeting the hacker in me 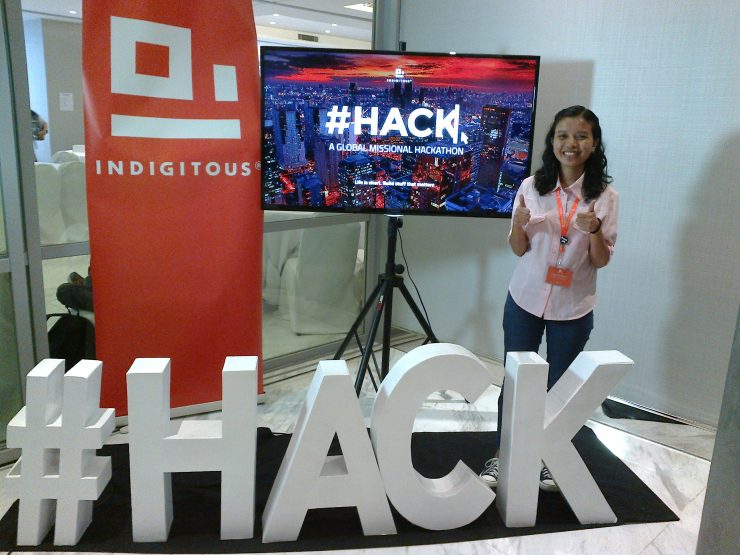 I am not a coder.

I know (very) little about computers and programming, let alone HTML, CSS, and other stuff like that. I am just a simple writer whose experience mostly comes from being the editor-in-chief of my own diaries and journals. Other than my communication background and my random ideas, I don’t have anything else that may align me to the “techie” world.

That’s why when I was invited by a friend to attend Indigitous #HACK, I was a little hesitant, thinking, “I don’t think I belong there.” How am I supposed to contribute in creating an app that will “change the world”?

But I joined still.

I was rooting on what I’ve read in the FAQs of Indigitous #HACK, which says one need not have hardcore coding skills to join, only a heart to change the world. And I did. So I came to the venue bringing that heart with me.

I had no idea how the event was going to go but the first instruction given to me was to choose from the pitched projects and join a team. Having a burden for missions, I joined #GoMultiply, where we had to work on an app that will help reach tribes and other unreached areas for Jesus Christ. It was thrilling to work with a team composed of two coders, two web designers, three people with marketing background, and a cheerleader (that’s me, yay!).

I for one cannot make the app alone, but bringing our skills and ideas together made it possible.

I was amazed along the way as we brainstormed ideas and drafted how the app was going work. Here we are, people from different backgrounds, and yet somehow we were united and were taking seriously the challenge to find solutions to the world’s problems. I for one cannot make the app alone, but bringing our skills and ideas together made it possible.

Add to that are our mentors that helped us see our blind spots and threw tricky questions to our team that made us rethink and reconsider some areas of our project. All these were very crucial in polishing our app.

Sharing the Gospel at #HACK

More than the actual making of the app, my #HACK highlight was when God used me to share Jesus with one of my teammates. We were having lunch together as a team when one of my teammates said that he is still searching for God and that he is exposing himself to different beliefs and philosophies with the hope to find Him. We then engaged in a deep conversation and I started asking Him about his idea about Heaven, about salvation, and if he believes that it is possible to have a relationship with God. After listening to him, I offered to share what I believe in as well.

It was a reminder for me that indeed, our awesome God can use events and even simple conversations to make Himself known.

He listened to me as I shared the Four Spiritual Laws — telling him about God’s love, man’s problem of sin, Jesus as the way to God, and ultimately God’s offer of a personal relationship with those who accept Jesus as their Lord and Savior. I then asked him if he wants to receive Jesus and he said, “Ipraymoako” (pray with me). Right then and there, I led to him to a prayer inviting Jesus Christ in his life. That’s one more precious soul for Jesus!

I was, and still am, amazed at how God moved in his and my life. It was a reminder for me that indeed, our awesome God can use events and even simple conversations to make Himself known. I am in awe!

Our project may not have been awarded during the event, but I know that we made God smile. I know that no effort is ever in vain so long as it is done with God’s glory in mind. As we, His children, took a step of faith to start building the app, we were already victorious. The event was not the end,  though; our team, together with some mentors, are going to meet again to take our project to the next level. Glory to God!

Indeed, Indigitous #HACK widened my perspective about missions from my campus to, literally, the world. It’s not a matter of age, location, or even skills. It’s about the heart to use digital technology for Jesus.

Who would have thought that a little student like me can have a worldwide impact?
I can.
I did.
I am.

Someone recently asked me about my thoughts on Indigitous #HACK:

There are many people out there who are dreaming to change the world. But here at Indigitous #HACK, we don’t just dream –we make it happen.

I am Mae Toledo, a student, a writer, a hacker, all for God’s glory.