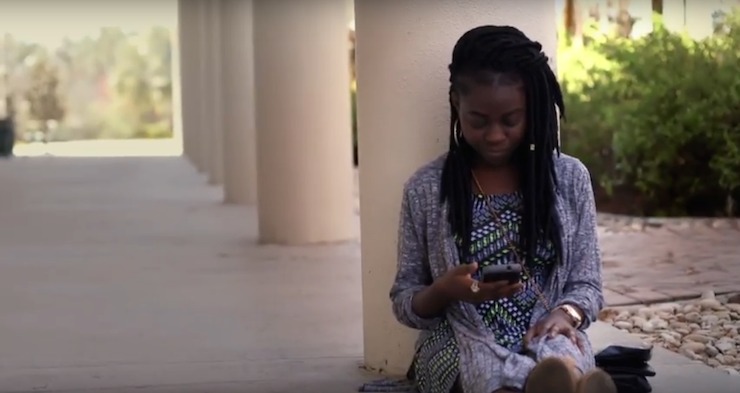 So you have a friend who doesn’t have a relationship with Jesus and you really want to talk to that person about God. The problem is you don’t know how to start. You’ve probably intended to have the conversation many times, perhaps even rehearsing the talk before you meet up with your friend. But then it doesn’t happen. You’re waiting for the right moment, but you can’t seem to transition your conversations about sports, music, and whatever is trending on the Interwebs into a conversation about faith. There’s just no way to do it that seems normal to you.

That’s because it’s not normal, not really. God’s calling to make disciples and share the Gospel is not something that is normal in our culture. It is in fact countercultural. Some people are so gifted in evangelism that they make it seem normal — I once had a friend who was a bartender who would talk about Jesus to virtually every person who bought a drink from her and it never seemed weird — but that is unusual.

To most people, it’s awkward. And people try to avoid awkwardness. As an introvert, I sympathize. But here’s the thing: God doesn’t only call those He has given the gift of evangelism; He calls all Christians to the Great Commission. So how can introverts and others unskilled in evangelism respond?

In his great article on Medium, Liam Savage says, “Often, the people I most strongly desire find a relationship with Christ are those I also carry the most fear about jeopardizing my friendship with. Even though I know introducing them to faith is the most loving thing in the world I can do, my feeble attempts often come across as critical, argumentative, pushy, or just plain out of touch with their reality.”

Wouldn’t it be great if you had hand-picked video content designed to start spiritual conversations as well as coaching in how to kickstart those conversations? Well, that’s the value proposition made by Voke. 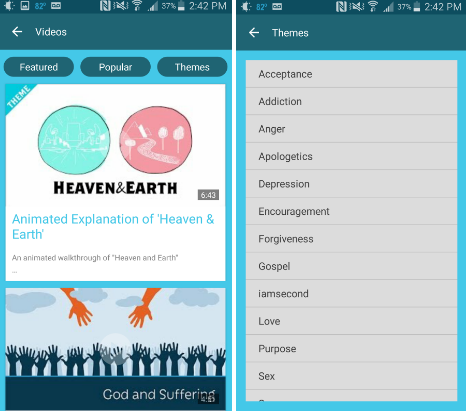 If you’ve been part of the Indigitous movement for a while, you’re probably familiar with Voke. Voke is an app (Android and iOS) that comes with a curated list of video content designed to kickstart spiritual conversations. The videos can be searched by theme or popularity. Once you send the video link to your friend — which is pretty much the most natural thing in the world — Voke will tell you when they watch it so you can talk to them at the moment of impact — perhaps the very moment that the Holy Spirit is working in their heart!

But you still have to transition the video into your conversation. That’s where the fear of awkwardness comes in again. Okay, my friend watched the video, but what do I say now? That’s where the Vokebot can help you out by suggesting some conversation Kickstarters, which can be anything from “what did you like most about the film” to “where are you in terms of following Jesus?” 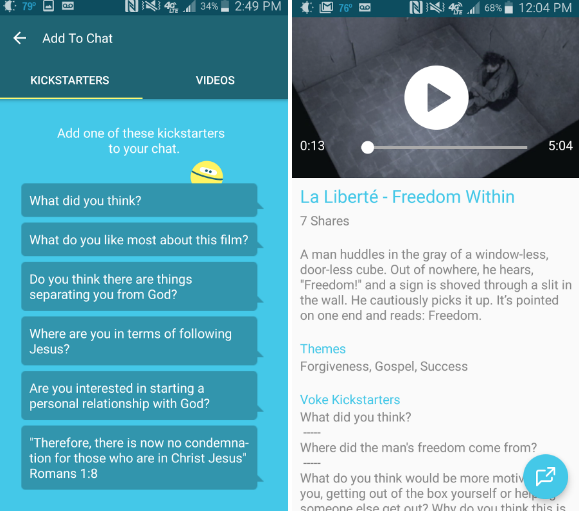 I can’t promise that you won’t feel nervous and awkward when sharing a video on Voke for the first time, or the first time you send that conversation Kickstarter. I can say that it’s a much more natural transition to spiritual conversations than anything I’ve experienced face to face. Despite our aversion to awkwardness, we’re willing to put ourselves in uncomfortable situations like first dates and job interviews when we see that the reward is worth the risk. With the potential reward of your friend beginning an eternal relationship with Christ, are you willing to share a video?