Making Caribbean disciples with an app 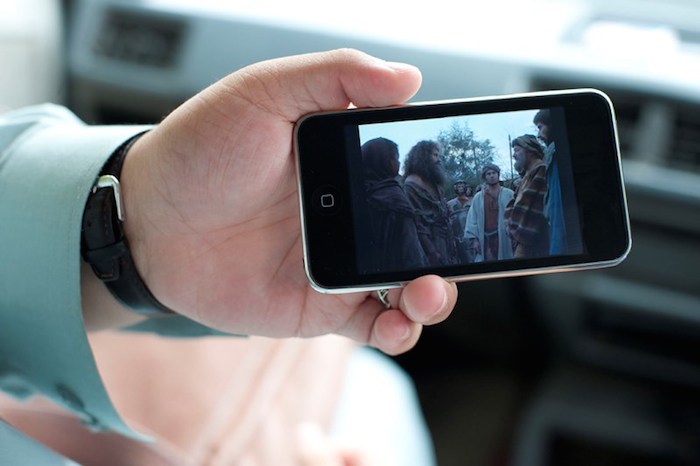 By an anonymous author*

Omar’s** eyes grew large. Only recently had he placed his faith in Jesus. As he watched film clips from the Jesus film, he thought of his family and friends. Most of them were Muslim. Omar longed for them to learn about Jesus and how he came to save people!

During the spring of 2016 a Jesus Film Mission Trips™ team traveled to Trinidad and Tobago to partner with an existing ministry. The team trained local staff and students how to use the Jesus Film® app in evangelism. Omar was one of these students.

Omar watched intently as the team demonstrated how to use short films to start conversations with people. Omar and others loaded the Jesus Film app onto their smartphones as instructed. Next, the team modeled how to easily transition from using short films to short segments of the Jesus film in order to help a conversation move toward spiritual matters. Last, the team showed how to use a second app, called God Tools, to share the Four Spiritual Laws. All of this could be done using smartphones and tablets. Omar was intrigued. This seemed easy.

After the training, Omar and the other Trinidadian students and local ministry staff paired up with the JFMT team and went out in the campus and community to practice this new conversational evangelism strategy.

Omar was amazed at how easy it was to approach people and invite them to watch a short film. It seemed so natural to start spiritual discussions using the Jesus Film app.

Since then, Omar has continued to be discipled in his faith. He has also continued to use the Jesus Film app to share his faith countless times with others.

Omar has personally seen the Lord use this to bring forty people to trust Christ through the method he learned from the JFMT team!

The story doesn’t end here, though! This summer Omar and several of the other trained students will travel to a conference in the Dominican Republic where they will train students and professionals from various Caribbean countries to use this Jesus Film app strategy. This will further help to launch new ministry movements in the Caribbean countries.

Please continue to pray for Omar as he grows in his faith and for the witness he is to others. Please pray for the upcoming summer training with other Caribbean nations, that this strategy would be reproduced and lead to many, many new followers of Jesus.

* This author’s name not given to protect his security.

**Omar’s name has been changed to protect his security and anonymity.