“Now I feel so much more confident in sharing my faith,” says Mark about using the God Tools app. His experience is typical. God Tools was created as a way to make it easier for people to share the Gospel, as a way of simplifying the complex Gospel story in a way that is easy to share and easy to follow. As the makers of God Tools like to say, if you can use your phone, you can share your faith.

When talking about using digital strategies for evangelism, it’s important to not only know that they should work in theory, but to hear stories of how God is using those strategies for His glory. For that reason, I was excited when I recently read some great stories of people making Jesus known using God Tools and wanted to pass those along to the Indigitous community. These stories represent a small fraction of what God is doing through God Tools, an app that has been used in more than 357,000 spiritual conversations and 63,000 Gospel presentations in 66 languages over the last year.

Last January, I shared the Gospel with an international student from Asia and he immediately accepted Christ. Over time this student, Fang, began to grow in his walk with the Lord.

This fall another international student from Asia named Wei began to get involved in our movement. Wei had started coming to our weekly meetings and seemed really interested in knowing more about Jesus. Wei’s English is not as good as Fang’s, so I set up a meeting with myself, Wei, and Fang. It was during that meeting that we used the God Tools app to share the Gospel with Wei in Chinese.

With the help of the app and Fang, Wei accepted Christ that day. Later on in the school year, Fang’s mom came to visit him from China. Like Wei, she knew little to no English. Fang wanted me to come over one evening so that I could share the Gospel with his mom. Again I used the app as well as Fang to explain the Gospel to her in Chinese. That night Fang’s mom became a Christian. Later on in the semester, Fang invited his friend Amelia to our meetings, and shared the Gospel in Chinese with her using God Tools. She accepted Christ that day.

About a month before Spring Break, Fang decided that he wanted to start a Chinese Bible study with his friends. One of those friends he invited was a guy named Bruce. One week, it was only Fang, Bruce and myself at the Bible study. Fang came up to me before we started and asked, “Can I use the app and share the Gospel with my friend by myself?”

Naturally I said yes and Fang used the app to share the Gospel with his friend in Chinese. It was such a beautiful memory. When it was time for Bruce to pray to receive Christ, he looked at me and asked, “Can I pray this in English?” I said yes, but told him that God understands all languages.

“I know,” Bruce said, “but I want to pray in English so you can remember this moment when I became a Christian for the rest of your life.” Fang is now leading a Bible study with Bruce and Wei in it. Amelia is involved in a women’s Bible study and is getting trained in how to share the Gospel and her testimony. – story by Darren

The Lord allowed me to meet Eduardo, at that time a freshman at a university in California. The meeting was quick, but I left with the impression that Eduardo was looking to learn more about God.

A few days later, I ran into Eduardo in the Student Union. I knew I had to take a step of faith and share the Gospel with him, but I didn’t have any of my usual Gospel tracts with me. I did, however, have the God Tools app on my phone. It was great to watch Eduardo engaged as I explained the Gospel through the app. One of the most clarifying moments for him was seeing the picture of the “two thrones.” The visual helped him clarify what he had desired for a few months now: to submit to God’s leadership in his life out of trust, rather than out of duty.

When I showed Eduardo the suggested prayer of faith, without my asking, he said, “I can say this prayer and mean it, and there is nothing that would stop me from praying it.” We prayed together and he found new life that day. Today he is wrapping up his second year in college, faithfully following Jesus, and helping lead a small group at his local church! – story by Joseph 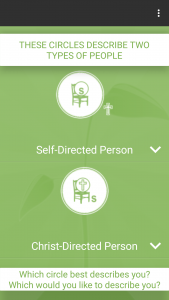 I recently took part in a mission trip to Eastern Europe. A highlight of my week was meeting and interacting with Naomi, a medical student from Western Europe. She had been involved with Agape on campus for a little while, but she was still young in her faith and had never shared the Gospel before.

She and her friend Jennifer agreed to go sharing with our group on campus and when I paired up with her, she was clearly eager to learn. She jumped right into our first conversation with a collegiate volleyball player and shared parts of her story and experience with God as we went through Soularium cards with the student. As the conversation progressed, I shared the Four Spiritual Laws while Naomi listened intently.

After the girl left for class, Naomi told me she loved our conversation and was so encouraged by our new friend’s openness to spiritual things. “I wish I could present the Gospel as clearly as you,” Naomi said, “but I always get nervous and have no idea how to clearly communicate my beliefs the way you just did.”

I told her that wasn’t a problem because I had a great app I could use to easily teach her how to share her faith. Right there in the cafeteria, Naomi downloaded the God Tools app on her iPad and we walked through how to use the Four Spiritual Laws, everystudent.com articles, and other tools to explain the Good News to others.
“Wow, this is really amazing! Now I feel so much more confident in sharing my faith,” Naomi said with the biggest smile on her face ,thinking about how she was now equipped to share her beliefs effectively. I asked if she wanted to initiate with another student and she immediately answered with an enthusiastic “yes!”

Naomi, who not an hour prior admitted that she had never shared her faith before, boldly led what turned out to be a bit more difficult conversation with this next student. However, she asked great questions and smoothly navigated the discussion like an old pro.

We chatted more about our experiences that afternoon and she told me she looked forward to sharing the Gospel more often. I had her write down five names of friends who she wanted to know Jesus and then I encouraged her to take the step of faith to share with each of them in the next month. She responded enthusiastically, “Challenge accepted!”

Thanks to the God Tools app, I feel like I was able to squeeze many hours of discipleship and evangelism training into about 20 minutes and leave Naomi with all the tools she needs to proclaim Christ boldly on her campus. – story by Charlie

Editor’s note: All names have been changed and locations generalized for security purposes.