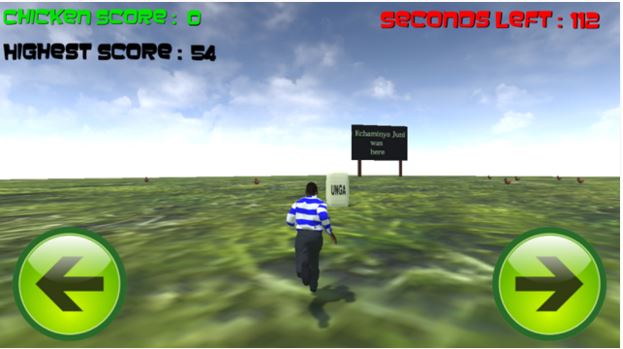 Before Indigitous #HACK, Indigitous partnered with Code for the Kingdom for their first global hackathon in 2015. At Code for the Kingdom Nairobi, one attendee had the idea of creating a simple mobile game to share the Gospel in a fun and memorable way. The result of that idea and hours of hard work is a game called Ale the Luhya.

Project leader Echaminya Mbarani envisioned Ale the Luhya as a way to “share Biblical concepts in a graphical and fun way to evangelize and draw people towards Christ.” It’s a simple race against the clock type of game. You play as Ale (short for Alex), who is part of the Luhya tribe, the second-largest tribe in Kenya.

When the game starts, you have two minutes to run around catching as many chickens as you can, getting points for each chicken. Other items will appear at random that will help you. For example, grabbing a bag of flour boosts your speed for 5 seconds. Picking up a Bible will boost your speed for 20 seconds. That is because “man shall not live by bread alone, but by every word that comes from the mouth of God” (Matt 4:4).

Sometimes a large cross will appear on the screen. When that happens, you will hear a chorus of “hallelujah.” Picking up a cross will give you life – in this case increasing your time by 30 seconds. However, you can never tell when or where a cross will appear in the game, just as the Bible says, “watch therefore, for you know neither the day nor the hour” of Christ’s return (Matt 25:13).

In addition to the gameplay, Bible verses are shared on billboards as another way to pique curiosity in the Gospel. Ale the Luhya has developed a following in Kenya since the hackathon, embraced by the local communities of gamers.

“At first it was just 10 downloads from friends and then in December [2015], I started receiving phone calls with people telling me that the game is popular,” Echaminya told Mediamax. As of this writing, Ale the Luhya has 5,000 downloads with no real marketing aside from sharing on Facebook.

In addition to game design, Echaminya loves art and created Lightmight Studios for sharing and selling his spiritual-based art. You can download Ale the Luhya from the Google Play Store.

Editor’s note: If working on a fun project like this interests you, come to Indigitous #HACK.