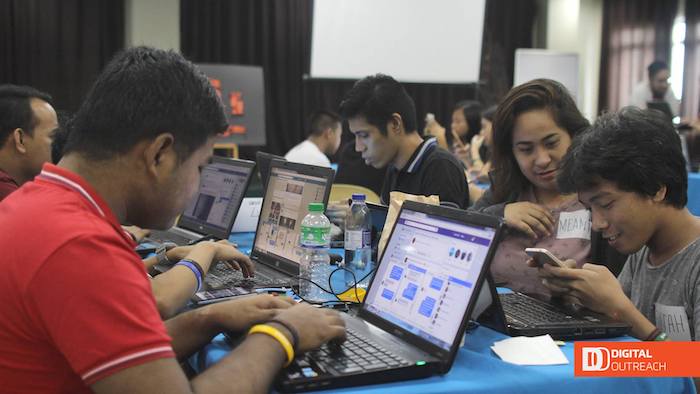 In addition to working on projects that matter at Indigitous #HACK, several locations also held Digital Outreaches. Following Indigitous’ model for a Digital Day of Outreach, participants at the hackathons set aside time to use Voke, WatchThinkChat, and social media to share evangelistic videos with the people they know that did not yet have a personal relationship with Jesus.

Overall, thousands of people were contacted and exposed to the evangelistic video, with more than 50 people indicating a decision to follow Christ. “A guy received the video on Facebook and made a light comment” but didn’t seem very engaged, says Yomi at #HACK Lagos. “But our participant kept probing and eventually he agreed to pray the prayer and our participant sent him a follow-up lesson. We’re trusting that God will establish the converts in His kingdom and in a church.”

Samson at #HACK Addis recalls how a teacher at a local film school, which was a partner at the event, was able to share the Gospel with an old friend that he had known since elementary school. “He shared the Falling Plates video and she said, ‘yes, I will pay to receive Jesus Christ as my personal savior. He was surprised and couldn’t believe it as a media professional!” Samson says. The idea that digital strategies like film, apps, and social media can be used to help people begin a relationship with Jesus was “eye opening for him and for the whole film school,” Samson says. “We are now planning to conduct short film festivals together.”

“Many young people here, some pastors or youth leaders, can see the benefit or the power of sharing Jesus online,” says Wendy with yesHEis, who partnered with Indigitous to host the Digital Outreach in Manila.

A Digital Outreach is a great way to get people started sharing their faith who have never done so before. It can turn anyone with a smartphone into a missionary. Great tools like Voke make it easy for anyone to kickstart spiritual conversations. It is a great event for a youth group or any group of people who you want to help mobilize for Jesus. Find out more about a Digital Day of Outreach, including a hosting guide, here.