On October 2-4, I had the pleasure of representing Indigitous at Code for the Kingdom Albuquerque, which was part of the Global Hackathon. I was nervous about going because I don’t have coding skills – or any tech skills for that matter – and as far as being an ambassador for the Indigitous movement, let’s just say that’s not the type of role that an introvert would seek. I know that God was working in me and through me during that time, though, and it ended up being an amazing experience.

Before heading to New Mexico for the hackathon, I prayed that God would use me for His Kingdom. Without being a coder, I didn’t know how God would use me, but I was confident that He would.

Someone once said to me, “In the Bible God uses a donkey for His purposes, so He can definitely use you.” My goal, therefore, was to be as useful as a donkey. At the hackaton I met Trina, who came from Los Angeles because she felt called to contribute to the hackathon, even though she also doesn’t have tech skills.

“People kept asking me why I would go to a hackathon,” she said. “’What will you do there?’ they all asked.”

I told them, “Whatever God wants me to do.”

I was inspired by her spirit and her willingness to follow God wherever He leads her. As it turns out (not surprisingly), there was a project to which both of us could contribute. Ruben, a developer with Faith Comes by Hearing, needed some help adding sound to his app, everything from background music to character sound effects. Trina and I were able to help with that aspect as well as other parts of the project. No coding required.

I would later hear from people at other hackathon locations that they wished there were more people with skills beyond coding, such as designers, business analysts, and marketers. 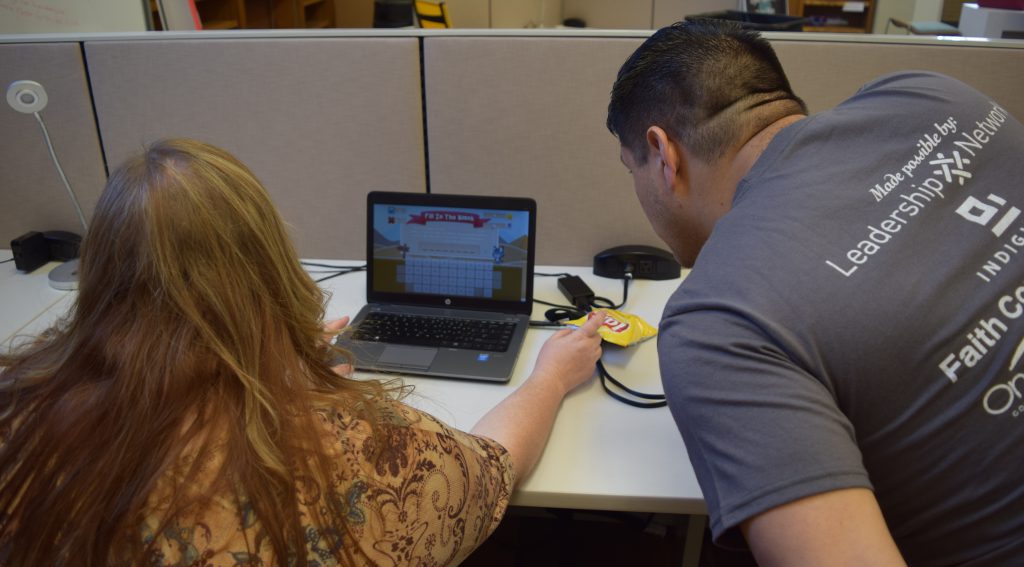 Ruben and Trina working hard on the app

What I took away

I’m proud to have worked on an app that I think has great potential. The app, called Bible Games, is intended to help children learn and apply Scripture through fun gamification of memory verses.

More importantly, I’m glad that I met so many great people, wonderful people who have a heart for God and a passion for the Great Commission. Though Code for the Kingdom Albuquerque was a small group, there were a lot of exciting projects that could have major Kingdom impact.

As I left Albuquerque, I was sad to leave the great people I had met, although I admit I was glad to go back to a diet that didn’t include green chile with every meal. I was excited, though, because I had experienced how God can use people for His Kingdom, including using those without tech skills at a hackathon. In the end, I was as useful as a donkey, which I suppose is all anyone can ask.