How we used Instagram to start a campus movement

Editor’s note: April-Sterling Mills is a missionary in Belfast, Northern Ireland. She tells us how she and fellow missionary Nikki Novak used Instagram (@studentlifearts) to get into a hard-to-access art school.

One of the campuses we really wanted to explore was University of Ulster School of Art. Because of its location in the middle of Belfast, it’s a high-security campus closed entirely to anyone who isn’t a student. We had tried initiating and meeting students in the surrounding areas, but we just couldn’t seem to get very far. Since most students are online, and art students specifically are on Instagram to network, we decided to try something brand new!

We created an Instagram account for the student movement we wanted to start, calling it Student Life Arts. When creating the account, we made sure we had an aesthetically pleasing page with some content posted. We also wanted to make it obvious that we were a Christian organization but something that was inclusive and open to all students. We followed students by searching hashtags and we tagged locations like the university, the campus store, and nearby coffee shops. We were especially keen to follow people who showed anything Christian in their bio, since we were looking for key students to launch the movement. 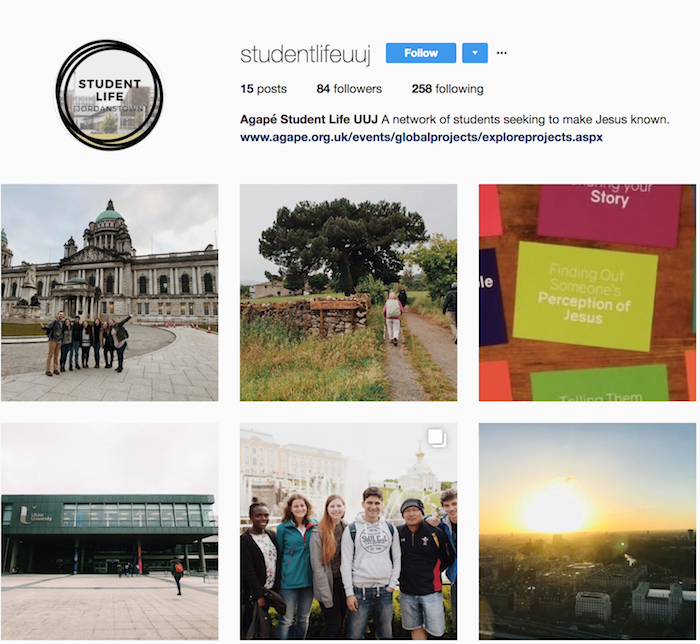 When someone followed us back we would direct message (DM) them, saying we were new to the area but were trying to start Student Life group on the arts campus and just wanted to learn more about the students and university. When we met with a Christian, we got a ton of positive feedback and heard we were needed on campus.

It was a step of faith for us to be so outwardly Christian on social media, because we don’t want to deter from the inclusion of all students since Christianity and religion are such touchy subject here in Northern Ireland.

It was also a step of faith to begin messaging students. We thought, This is crazy! I would never respond to some random account messaging me. But the first day we sent out 30 DMs and received 10 responses, ending up with around five meetings. Each student that we met brought friends who allowed us to further network.

Within just two months after we launched our Instagram account, we held an art expo. Sixteen students showed up at the expo to hear the Gospel, learn about Student Life, and enjoy the art of six students who displayed their work.  We’ve now seen three potential student leaders raised up and are meeting with them to see what our student-led missions movement could look like on campus in the fall.

We’ve started using this strategy with four other universities in Northern Ireland and all of those accounts have had a few students who have found them and messaged them, saying they’d like to meet up with us because they love what we’re doing! Praise God!